The Convention’s strategic intent is to slow, stop and reverse the loss of wetlands. A major part of this effort involves making policymakers, wetland practitioners and the wider public aware of the essential benefits that wetlands provide for humanity. To effectively advocate for wetlands requires that we increase visibility of the importance of wetlands and the work of the Convention. The consistent and correct use of the Convention’s name and visual identity is integral in achieving this outcome. The document below has been developed to provide guidance on how to design signage so that we can collectively strengthen the visibility of Convention’s network of Wetlands of International Importance.

At the 19th meeting of the Standing Committee of the Convention, 29 October-1 November 1996, the members adopted a decision that defines recommended wording for signs at all Ramsar Sites, when translated into the local languages of the sites.

The decision reads as follows: The Contracting Parties should endeavor to place descriptive signs at all Ramsar Sites, and these signs should include the Convention's logo, as well as the following suggested text as amended to meet particular circumstances:

The protection and management of this site is under the responsibility of: [name and address, including telephone and fax numbers, of the appropriate agency]. 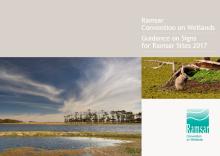